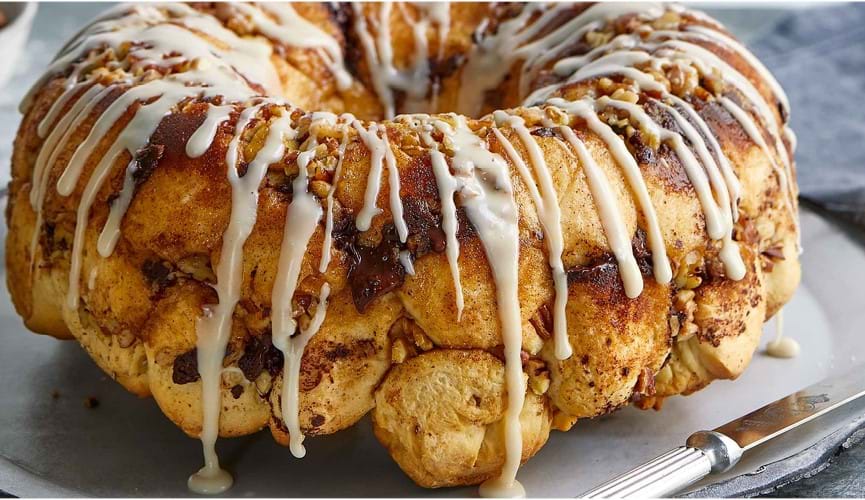 1.Bring the milk to a simmer in a pan, take off the heat and stir in 75g
of the butter and half the syrup. Leave until tepid.
2. Mix the flour with the sugar, salt and yeast in a large bowl. Make a well,
add the egg, then the milk mixture. Stir into a dough, then knead on
a floured surface for 10 mins.
3. Put into a greased bowl and cover with cling film. Leave to rise in a warm
place for 1-2 hours, or until doubled in size.
4. Combine the cinnamon and light brown sugar in a small bowl. Grease
a 2.5 litre bundt tin and sprinkle in 3 tbsp of the spiced sugar to coat,
then do the same with half the chopped nuts.
5. Knead the dough for 2-3 mins, then roll it into a 20cm square.
Divide that into an 8 x 8 grid, like a chessboard, to give 64 squares.
6. Melt the remaining butter. Roll each of the dough squares into a ball,
then dip in the butter and the rest of the spiced sugar. Layer into the
bundt tin with the chocolate and remaining nuts scattered around them.
7. Pour over any leftover butter and spiced sugar, cover with cling film then
leave to rise for 1-2 hours until doubled in size.
8. Preheat the oven to 180°C/fan 160°C/Gas 4. Bake for 40-45 mins,
until risen and golden. Cool in the tin for 10 mins, then turn onto a wire
rack to cool completely.
9. To make the topping, stir the icing sugar, rum and remaining syrup
together until smooth. Drizzle over the bread to serve.