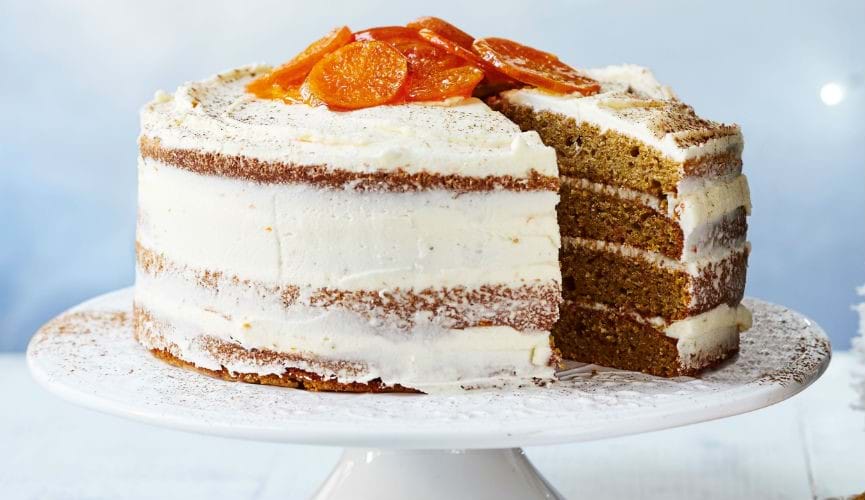 Put all the clementines in a pan of boiling water, cover and simmer for 1 hour, until soft.

Drain and leave to cool. Once cool, cut in half and remove any pips.

Whizz the clementines, including skin, into a purée
Preheat the oven to 180°C/fan 160°C/Gas 4.

To make the cake batter, beat the butter and sugar together in a bowl until fluffy, then whisk in the beaten egg, a little at a time.

In a separate bowl, mix the dry ingredients with half the clementine zest. Fold half into the egg mixture, along with half of the purée, then fold in the rest of each until the batter is combined and smooth.

Divide the batter between them and bake for 35-40 mins, until golden and firm.

Cool in the tins slightly, then turn out onto a wire rack to cool completely.

Reduce the heat slightly and simmer for 8-10mins, turning half way until softened and sticky
Transfer to a baking paper lined plate to cool and harden slightly.

To make the frosting, beat the butter until smooth, then add the icing sugar in stages, beating until light and fluffy. Stir in the vanilla and remaining zest.

Cut each sponge in half horizontally to make 4 layers
Spread about 4 tbsp frosting on 1 layer, then top with the next layer.

Repeat until all 4 sponges are sandwiched together
Ice the cake all over with the rest of the frosting.

Decorate with candied clementine slices piled in the centre and dust with ground cinnamon to finish.