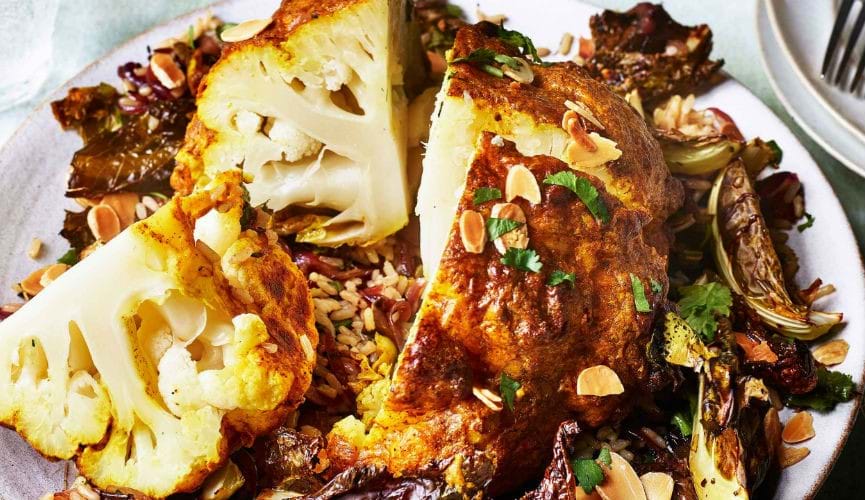 Preheat the oven to 220°C/fan 200°C/Gas 7
Remove the leaves from the cauliflower and set aside
Bring a large pan of water to the boil then simmer the cauliflower for about 15-20 mins, until just tender
Drain and leave to dry completely
Mix the yogurt with the spices and lemon juice
Put the cauliflower in a roasting tray and coat with the yogurt mixture
Roast for 45-50 mins, or until golden and soft when a knife is inserted
About 20 mins before the time is up, toss the cauliflower leaves in ½ tbsp of the oil
Remove the roasting tray from the oven and arrange the leaves around the cauliflower
Sprinkle the chilli over the leaves and cauliflower, then return to the oven
Meanwhile, heat the remaining oil and cook the onion for 8-10 mins over a medium heat, or until very soft
Add the sugar and vinegar, then cook for 5-6 mins, or until caramelised and sticky
Heat the rice according to the pack instructions, then stir into the onion, along with most of the coriander
Slice the cauliflower into 4, then serve with the onion rice
Scatter with the remaining coriander and the flaked almonds to finish