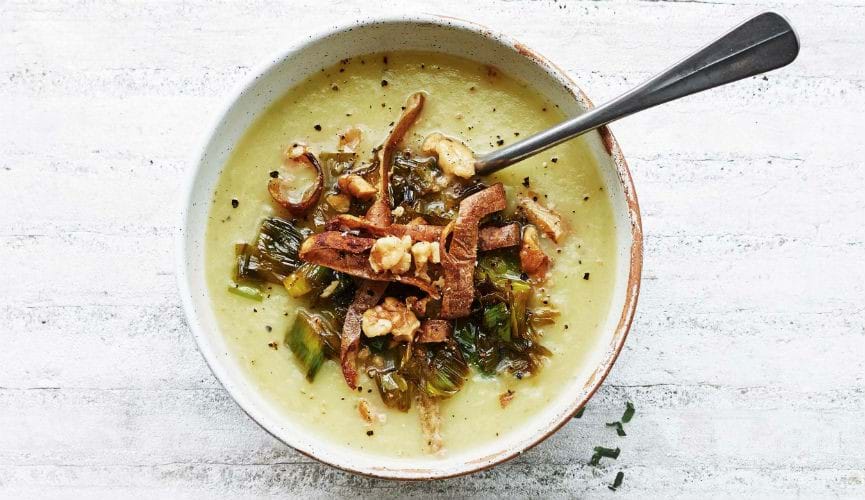 Heat the oven to 220°C/fan 200°C/Gas 7, prick the potatoes a few times with a fork, then bake for 20 mins. Turn the oven down to 200°C/fan 180°C/Gas 6 and bake for a further 45 mins, until the skin is crisp and the middle is soft when you pierce it with a fork.
Meanwhile, heat the butter and 1 tbsp of the olive oil in a frying pan over a medium-high heat. Add the green parts of the leek, season and fry for 5 mins, until starting to colour. Sprinkle with the brown sugar and 1 tbsp water, then turn down the heat. Cook for 15-20 mins more, until caramelised and sticky. Add a splash more water if the pan gets too dry. Set aside.
Once the potatoes are cooked, cut in half, carefully scoop out the flesh and set aside. Slice the skins into strips, and put on a baking tray with the walnuts and 1 tbsp of the oil, then season and toss together. Bake for 10 mins, stirring halfway, until the walnuts are golden and the skins crisp.
Heat the remaining oil in a large saucepan, add the rest of the leek, season, and fry for 5-7 mins, until softened. Stir in the potato flesh and vegetable stock, then simmer for 5 mins. Pour in the milk and season. Allow to cool slightly then blitz until smooth. Serve the soup topped with the caramelised leek, crisp potato skins and a crack of black pepper.

Try store your left overs or batches in your Nutrifresh Vacuum storage containers!