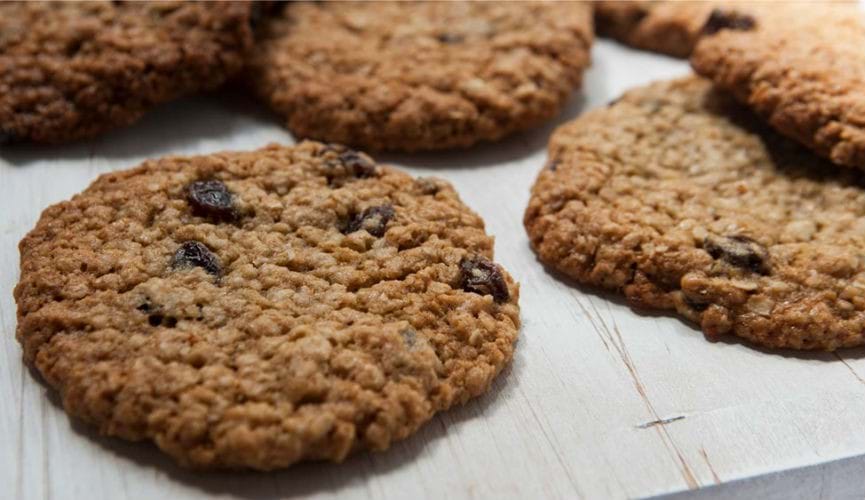 Preheat an oven to 175ºC and line three 30cm baking trays with baking paper, using a little oil spray or smudge of butter to help it stick. (You can do them a tray at a time if you don’t have 3.)
Squeeze the juice from the orange into a small bowl and add the raisins or currants. Stir to combine and leave to one side.
Place a clean large mixing bowl on a set of scales and reset the scales to zero using the tare function. Add the butter, oil, sugar and honey, each time weighing the ingredient into the bowl and resetting to zero before moving onto the next ingredient.
Crack in the egg, then beat or whisk this mixture together until light and creamy.
Spoon in the vanilla, baking powder and cinnamon, then beat that in to evenly combine.
Place the bowl back on the scales and tare it again. Weigh in the flour, then reset to zero before doing the same for the oats.
Scoop in the raisins, avoiding any orange juice left in the bowl and combine all the ingredients until you have one evenly mixed dough.
Spoon blobs of about 2 tablespoons of the mixture onto the baking trays, or if you have one use an ice cream scoop. Leave plenty of space between them.
Flatten the blobs with slightly damp fingers to a thickness of 1cm, making them fairly round but keeping them well separated on the tray.
Bake for 14 minutes until they are golden around the edges (the shelf higher in the oven may need a minute less than the one beneath it).
Remove the trays and leave the cookies to cool on the tray for 5 minutes before transferring to a wire rack to cool completely.